This post contains discussion of bulimia, rape, and bullying, as well as pictures of vomit and blood

This is going to be a disgusting post, and not a pleasant one.  However, I shed tears as I wrote it, and my chest felt squeezed tight with sorrow and sympathy.  I’d like all of you to pray with me, if you can find it in your heart to do so, and I’d like to address a wrong reaction to suffering that goes on in the life of thousands of women every day.

Today, I read that Lady Gaga admitted to having been raped at the age of 19.

It’s probably a common story, on the whole.  Many celebrities have experienced the very rape of their souls up on that stage.  They are forced to bare most of their body for the audience, they let their deep, dark secrets out in their dance and song, and they are manhandled by the industry that possesses them.  I’m sure that many have experienced sexual assault as well.  Lady Gaga has also spoken up, in the past, about being bullied.

However, to each individual human life, rape – of any kind – is life-alteringly important.  Just because there is someone being sexually assaulted every two minutes in our country doesn’t make it any less devastating.  At that moment, Lady Gaga – and hey, let’s look at her as a real person and call her by her beautiful given name: Stefani – at that moment, God was filled with sadness by what happened to the precious child, Stefani, whom He created and loves.  At that moment, she was a victim – a sinner who was sinned against by another sinner.  And God allowed it for a reason that we don’t understand.  But we can be assured that He is always wanting to draw her to Himself.

Yet, and this is where it gets saddest, Stefani chose to let this man and what he has done to her rule her life.

She claims that’s not the case.  In her interview with Howard Stern, she says, “I don’t want to be defined by it. I’ll be ****** if somebody’s gonna say that every creatively intelligent thing that I ever did is all boiled down to one ****head that did that to me.”

But she can’t even see that it has, indeed, defined and influenced her life. 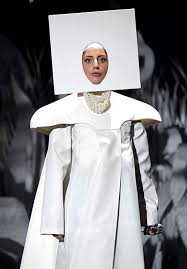 The conversation with Stern stemmed from a discussion of Gaga’s latest song, “Swine,” the lyrics of which are, as Gaga herself puts it, “about rape, the song is about demoralization.  The song is about rage and fury and passion, and I had a lot of pain that I wanted to release.”

In the show’s live performance at the SXSW conference in Texas, Stefani hired a vomit artist named Millie Brown.  What is a vomit artist?  If your skin is already crawling and your stomach flipping over uncomfortably, then you feel the way I did when I cautiously googled this term.  Millie Brown swallows milk mixed with food coloring or paint, after starving herself for two days to make sure there’s no food in her stomach.  She then proceeds to gag herself and make herself throw up the paint/milk concoction onto paper.  She considers this to be “using her body to create art,” but she has since been blasted online for downplaying bulimia and bulimic practices.  A petition is being signed to keep her from ever working with Gaga again, so as not to influence teenagers and promote eating disorders.  (To sign the petition, click here.)

The worst part about all of this, is that, during Stefani’s performance of her “rape song,” she had Millie Brown vomit all over her on stage.  Twice.  And, in Stefani/Gaga’s own words, this is why:

“I’ve gone through a lot of mental and physical therapy and emotional therapy. It hit me so hard. I was so traumatized by it that I was like, ‘Just keep going.’  Because I just had to get out of there.  I wasn’t willing to admit that [the rape] had even happened.  I’m going to take responsibility for all my pain looking beautiful. All the things that I’ve made out of my strife, I did that.  [I was] paralysed by fear.  Because it wasn’t until I was a little bit older that I went, ‘Wow, that was really messed up.’  I said to myself, ‘I want to sing this song while I’m ripping hard on a drum kit, and then I want to get on a mechanical bull’—which is probably one of the most demoralizing things that you can put a female on in her underwear—

‘and I want this chick to throw up on me in front of the world so that I can tell them, you know what? You could never, ever degrade me as much as I could degrade myself, and look how beautiful it is when I do.'”

Talk about a true visual as to how a woman can suffer.  And this is where I start crying again.

So the outfits, the craziness, the blood in one show, the vomit in another, and the eating disorders – seem to really all be because she is in the depths of self-loathing.  She feels that the only way to protect herself is to degrade herself to depths no man could ever imagine, so that, when someone hurts her, it will drip off of her like water on oil.  She has already hurt herself worse, and deadened her heart and soul to humiliation and pain.  Having someone throw up all over her was just next on the list.

Stefani, can I talk directly to you for a minute?

You may want to claim it’s all art and that you’re proud of it.  Others may say it’s all the man’s fault and blame him for everything.  But I think you hit on the real problem in the title of your hit “Born This Way.”

I have friends who were sexually abused.  I know people who suffered atrocities that make my head spin.  However, they don’t feel a need to degrade themselves.  They know something you don’t, Stefani.  And that is: that an all-powerful God created every muscle, organ, and bone of your body in love.  That this God designed you in your mother’s womb, watched over you in deep, intense, love, and that this same God sent His only son to be degraded, destroyed, murdered, and humiliated for you.  For you, Stefani.

No one ever need to be degraded again.

You are a wicked sinner, but so am I.  I am no better than you are in my sinful state, Stefani.  And the desire to degrade ourselves and hate ourselves comes from an understanding of our imperfect, damaged, natural state.  It doesn’t stem from what a man has done to you.  It begins at birth – you are born this way: imperfect, damaged, and disgusting because of your sin.

But instead of covering yourself with fake blood that does not save, instead of hiding  your degraded face, someone has already offered His blood for you.  His blood is pure, righteous, holy, and cleansing.  His blood covers your sins, your hurts, your pains, your past, and your shame.

You need never live in pain again.  You need never seek negative attention to atone for your past.  You are forgiven and atoned for if you embrace His Son who loves you and longs for you like someone would His erring bride.  He adores your very heart and soul.  He made you in all of your creative expression and unique personality.  He desires for you to use that deep, intense soul to love Him back and to share His love for others.  He deeply loves you, and you will never be happy without Him.  You will remain a degraded, self-loathing “Little Monster” without Him.

I grieve for you, Stefani, you who were specially made and loved by God.  You who I love as a lost sister of our King.

I am praying for you, Stefani.