At two and a half (yesterday!), this has not changed.  The screaming ricochets around the bathroom, deafening our ears, and makes us feel like we’re reenacting something out of Psycho.

She always gets water in her eyes, bellowing and standing up, crying and flailing.  Every time I, wrestling with her and trying to keep her sane, tell her the same thing:

“If only you looked up!”

Even though lying back calmly in my arms and tilting her head to the sky would produce marvelous results, she insists on keeping her head down and forward, jerking away from me, and letting the water flood her face, terrifying her.

I feel like, as Christians, we are the same way.

So often we are completely flooded and drowned in temporary problems.  Some are pretty serious!  And “keep your eyes on Jesus” always sounds so trite.

What does that even mean?

We humans live in Flatland.  We really do.  Our view on life and the world is so two dimensional.  When a problem or a person or a world is right in front of us, we can’t see around it.  It’s there, invading every inch of our two dimensional view. 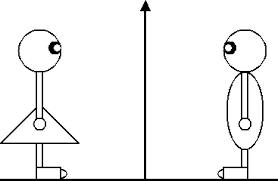 However, there’s a whole eternal perspective out there beyond that one looming problem taking up all of our five senses.

Wanting to be in control, it’s easy to say, “I’m going to keep my head forward and straight and take in this problem.  I’m going to let it live in my brain and soul and never take my gaze off of it until it goes away.”  And then we’re stuck, unable to move.

Instead, if we look up, in this Flatland world of ours, we see that the heavens go on for eternity: up, up, up.  And hey!  Going up and over can move us on past this problem, conquering it or handling it along the way.  Also, God sees four dimensions.  Not only does He see around and underneath and above the problem, but He sees what good it will produce in time.

When I am encouraged, or encourage others, to look to Christ in their situation, this is the meaning: lie back, even though it’s scary, and look up!

I am not saying to ignore problems or pretend they don’t exist.  And I also don’t mean to forget practical steps that have to be taken.  BUT, if you simply go spend time in the Bible and on your knees, begging God to show you what to do, and obey what He’s already told you, if you focus on simply trying to be like Him in every situation – he will work things out for you, usually by a perspective change.  It’s super hard to be discouraged when you’re busy mimicking Christ and focusing on what He’s done for you.

Some times the only way to solve problems is, not by ignoring them, but simply by paying more attention to God instead.  If you’re looking up and focusing on “How am I Christlike right now?” you won’t go wrong.  Whereas, if you find yourself going, “But the problem…!” with full-throttle emotion and fear and despair, you know you’re letting the water and stinging soap wash over your eyes.

And there is no need to drown.  Look up.

7 thoughts on “Christianity and Flatland”